Pokémon FireRed Version and Pokémon LeafGreen Version are enhanced remakes of the 1996 role-playing video games Pokémon Red and Blue. They were developed by Game Freak, published by The Pokémon Company and Nintendo for the Game Boy Advance. Pokémon FireRed and Pokémon LeafGreen were first released in Japan in January 2004 and in North America and Europe in September and October 2004 respectively. The games are part of the third generation of the Pokémon video game series and hold the distinction of being the first enhanced remakes of previous games within the franchise. Nearly two years after their original release, Nintendo re-marketed them as Player's Choice titles. The games received mostly positive reviews, obtaining an aggregate score of 81 percent on Metacritic. Most critics praised the fact that the games introduced new features while still maintaining the traditional gameplay of the series. Pokémon FireRed and LeafGreen were commercial successes, selling a total of around 12 million copies worldwide. 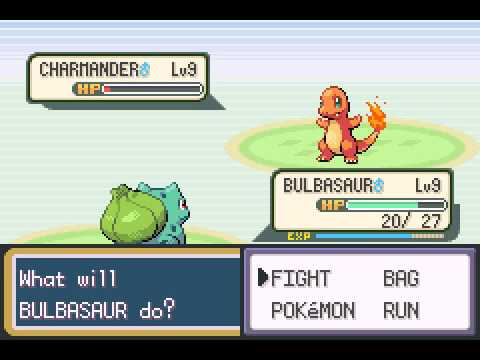 Pokémon FireRed and LeafGreen are in a third-person, overhead perspective. The main screen is an overworld, in which the player navigates the protagonist. Here, a menu interface may be accessed, in which the player may configure his or her Pokémon, items, and gameplay settings. When the player encounters a wild Pokémon or is challenged by a trainer, the screen switches to a turn-based battle screen that displays the player's Pokémon and the engaged Pokémon. During a battle, the player may select a move for their Pokémon to perform, use an item, switch their active Pokémon, or attempt to flee. All Pokémon have hit points (HP); when a Pokémon's HP is reduced to zero, it faints and can no longer battle until it is revived. Once an opponents Pokémon faints, all of the player's Pokémon involved in the battle receive a certain amount of experience points (EXP). After accumulating enough EXP, a Pokémon will level up.

Ordering this item you will receive the game cartridge only.
This game comes with a free 6 months warranty! This game is a reproduction, however it plays and operates just as a regular production copy would. On the off chance something happens to your game, just contact us. If we can't fix it for you, simply let us know if you'd like a replacement game or your money back. As soon as we receive the returned, faulty game, we will initiate the refund.